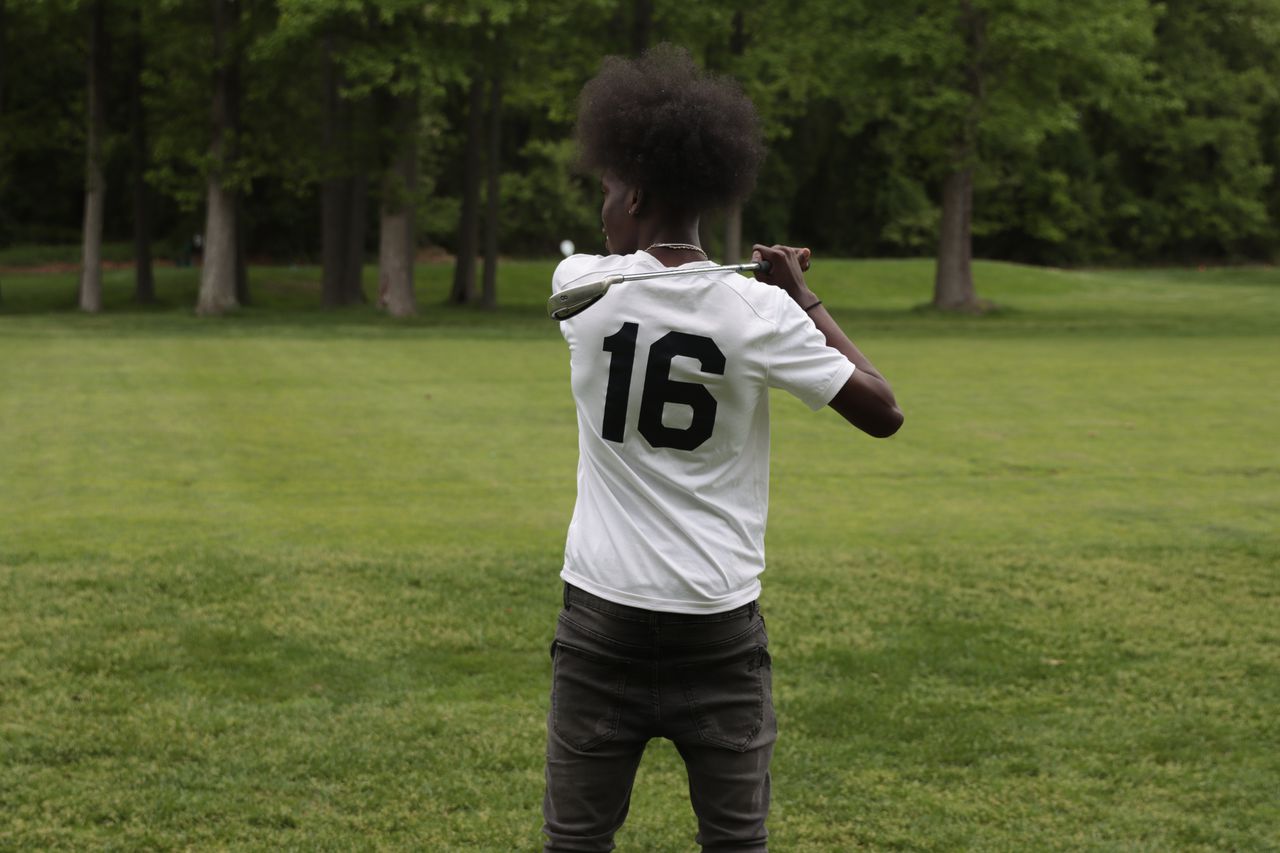 ‘It’s a different world’: IS students connect on special outing to experience what it’s like to play golf

STATEN ISLAND, NY – Much more than a game takes place on a golf course, from connecting with nature and learning patience to networking and problem solving. Recently, teenagers from three Staten Island youth groups came together for the first student-led golf outing at La Tourette Golf Course and, in many cases, experienced the sport for the first time.

“It’s very nice. It’s very relaxing. It’s a different world. I haven’t seen it before. I thought of it as an elite sport. Like something you had to be able to afford and be luxurious,” said Grace Odusanya, a student at Curtis High School and a member of My Sister’s Keeper, an organization that aims to bring together diverse groups of young people of all ages and provide them with access to experiences that build confidence, build community and Brotherhood.

“It’s my first time. I’m having fun. I never thought I’d try golf – but you know I’ve tried and I love it,” said student Tavoy Feary. of Wagner High School who wants to join My Brother’s Keeper, which was launched in 2014 as a national initiative by former President Barack Obama to change the narrative surrounding boys and young men of color by empowering them to unleash their full potential and fill opportunity gaps through mentorship and support networks.

The BSAC was developed by the New York City Department of Education in 2019 with the goal of fostering youth leadership skills and creating space for youth voice in policy development for schools. public. BSAC representatives from each school meet monthly to discuss issues and share ideas.

“My favorite part of BSAC is understanding what’s going on behind the scenes and knowing that student voices really matter,” said Maria Psomas, a student at CSI High School for International Studies who attended the golf outing. .

She added: “This is one of the best trips I have ever been on. I was able to learn about golf and relax with students and adults.

Before the students got their hands on a golf club at the event, they received culturally appropriate training, which included learning common golf etiquette, the history of the origin of the golf in 15th century Scotland and the social justice issues surrounding golf as a sport.

“It’s all about exposure and the beauty of SI in that we have so many diverse students and we bring them together,” said District 31 Superintendent Dr. Marion Wilson, who organized the event. with his team.

Various civic and community leaders have volunteered as chaperones, including: Darlyne Degramont, special education administrator for District 31; Bobby Digi, Founder and Executive Director of Island Voice; Kamor Olayokun, district representative for My Brother’s Keeper, and Andrew Crawford, director of the Community Partnership and Intergovernmental Affairs Unit for the Richmond County Attorney’s Office. They drove groups of students in golf carts, participating in the event while discussing their goals and life experiences – giving young golfers insight into conversational networking on the course.

“We’re really filling in the gaps in terms of what some of our kids think about certain sports,” said Degramont, who also serves as the head of My Sister’s Keeper, Staten Island chapter. “We try to get the children to learn socially and emotionally, especially after the [coronavirus] pandemic. Some of them have suffered great losses and others have not been able to acclimate properly during remote learning, so this is definitely an opportunity to take them out and learn something new.

Wilson said she’s been considering this golf outing for years and added that she hopes the event will allow them to unlearn the prejudice that golf is only for wealthy elites – so students can unleash their potential through sport.

“I think for me it’s about never say never. And it’s good to experiment with new things,” Wilson said.

Colin Elias, who has been playing golf since age 5, is a senior at Staten Island Technical High School. He recently received a golf scholarship to Pomona College in Claremont, California.

“What golf has given me over the years is access to a different world. Golf is a multi-billion dollar industry, and apart from that, it’s the connections you make on the course,” Colin said. “It’s a social game, but it also has this aspect of social mobility. Golf is exclusive and restrictive, and a lot of people can’t be exposed. I’m so lucky to have had this opportunity throughout my life.