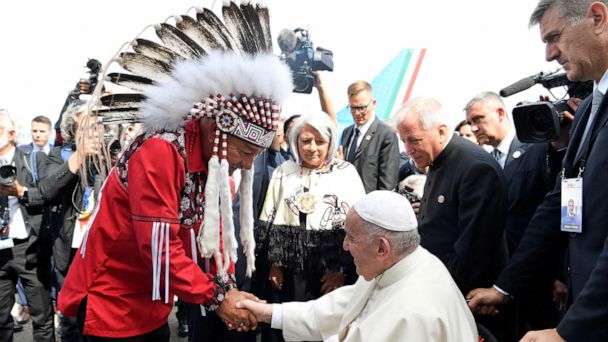 Pope Francis offered a long-awaited apology to Canada’s Indigenous community on Monday about the Catholic Church’s role in the generational abuse it suffered in residential schools for nearly 150 years.

Schools have been run for decades by churches and the federal government of Canada to force assimilation.

“I am here because the first step in my penitential pilgrimage among you is to ask for forgiveness again, to tell you once again that I am deeply sorry,” Francis said. “Sorry for the way in which, unfortunately, many Christians have supported the colonizing mentality of the powers that have oppressed the indigenous peoples.”

“I humbly ask forgiveness for the evil committed by so many Christians against indigenous peoples,” he added.

Beginning in the 1800s, thousands of Indigenous children in Canada were removed from their homes and families and placed in so-called residential schools aimed at ridding children of their connection to their Indigenous communities, language and culture. Some schools were run by the Catholic Church, where missionaries participated in policies of forced assimilation and abuse.

Upon his arrival in Edmonton, the capital of the Canadian province of Alberta, Pope Francis was greeted at the airport on Sunday by First Nations, Métis and Inuit leaders, Canadian Prime Minister Justin Trudeau and Mary Simon, who is Canada’s first Indigenous Governor General. .

Francis said the apology is just a “starting point” and acknowledged that some members of the Indigenous community have called for further action to address the injustice of the boarding school legacy.

“Dear brothers and sisters, many of you and your representatives have said that asking for forgiveness is not the end of the matter. I completely agree: it is only the first step, the starting point “, said Francois. “An important part of this process will be to seriously investigate the facts of what happened in the past and to help residential school survivors have an experience of healing from the trauma they suffered.”

Chief Tony Alexis of the Alexis Nakota Sioux Nation, who called on Pope Francis to apologize in person on behalf of the church, says ABC News’ Marcus Moore that Francis’ visit is “a validation of what happened with the church and how they hurt and abused our people.”

Ahead of his historic seven-day trip to Canada, Pope Francis asked for prayers to accompany him on what he called a “penitential pilgrimage” and apologized to Indigenous communities for the role of the Catholic Church in abuses.

“Unfortunately, in Canada, many Christians, including some members of religious institutions, have contributed to policies of cultural assimilation which in the past have seriously damaged, in various ways, indigenous communities,” Francis said. said in a July 17 address from the Apostolic Palace to the public in St. Peter’s Square at the Vatican, according to The Associated Press.

“For this reason, recently, at the Vatican, I received several groups, representatives of the indigenous peoples, to whom I expressed with pain and my solidarity for the evil they suffered, added Francis.

According to a 2015 report published by Canada’s National Center for Truth and Reconciliation, residential schools were an integral part of the Canadian government’s “conscious policy of cultural genocide”, where children were cut off from their families, punished for speaking their Indigenous languages ​​and some suffered physical and sexual abuse.

“The Canadian government pursued this policy of cultural genocide because it wanted to divest itself of its legal and financial obligations to Indigenous peoples and take control of their lands and resources. If every Indigenous person had been “absorbed into the body politic, there would be no reservations, no treaties and no Aboriginal rights,” according to the report.

Reflecting on the generational trauma inflicted on Indigenous communities, Alexis recalls a conversation with a survivor who told her, “The only thing I learned at residential school was how to hate myself.

The Pope’s visit comes a year later nearly 1,000 sets of human remains have been found at the cemetery of the former Marieval Indian Residential School in Saskatchewan in western Canada and at the former St. Eugene Mission School for Aboriginal children in Aqam, a community in British Columbia. It is not known how many students in total died in residential schools and what their causes of death were.

Following the discovery of the graves in Canada, US Secretary of the Interior Deb Haaland – the first Native American to hold a cabinet post – launched an investigation in June 2021 into the US government’s role in funding residential schools as part of of an effort to dispossess Indigenous peoples of their land to expand the United States.

The probe the first results were presented in a May report which revealed that more than 500 Native American, Alaska Native, and Native Hawaiian children have died over 150 years in U.S. government-run Native boarding schools and churches.

Indigenous Nations scholars estimate that nearly 40,000 children died in Indigenous boarding schools. According to the federal report, the Department of the Interior “expects continued investigation to reveal that the approximate number of Indian children who died at federal residential schools is in the thousands or tens of thousands.”

Haaland, whose grandparents attended Indian boarding schools, now oversees the government agency that has historically played a major role in the forced resettlement and oppression of Indigenous peoples and said his work was a chance to bring a some healing to the community.

“I have a great obligation, but my mother, my grandfather and my grandmother taught me that when you are asked to do something for your people, you step in”, Haaland says “Nightline” in an interview earlier this year.

Community concerned about crime along ML King Drive in Atlanta