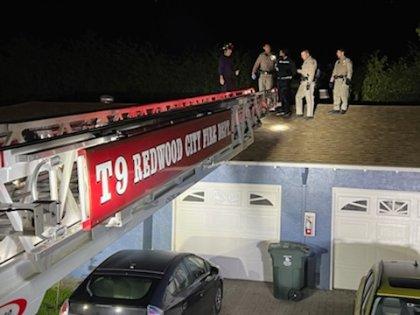 California police called a rescue helicopter to find a cyclist who jumped a red light. After a short foot chase, officers lost sight of the suspect before the California Highway Patrol Flight Operations Department spotted him hiding on a rooftop.

The department’s official Facebook page said officers attempted to apprehend the cyclist early Tuesday morning after he allegedly jumped a red light at a crossroads in Redwood City, in the Bay Area of â€‹â€‹northern California.

But when the biker failed to stop, abandoning the bike and escaping on foot, the Redwood City Police Department and the San Mateo County Sheriff’s Office were called in to establish a perimeter around the surrounding streets.

The helicopter unit quickly found the suspect hiding on a roof. The Redwood City Fire Department helped return the man to police who arrested him for escaping a police officer and resisting arrest.

Art Montiel, spokesperson for CHP Redwood City, said officers found methamphetamine and drug paraphernalia during the arrest and noted that the suspect had felony and misdemeanor warrants.

â€œCyclists are meant to be like any other vehicle,â€ Montiel said. “They are required to follow the rules of the road.” He explained that while his officers usually â€œdon’t stopâ€ cyclists during the day, â€œwhen you see [cyclists] do something at night, something might happen. “

The CHP’s social media post thanked the four departments involved in the lawsuit for their swift response and assistance to the incident which occurred around 3 a.m. on Tuesday morning.

In May, police at a Dallas university tasered a cyclist after the cyclist jumped a red light. The police department, colloquially described as “Campus Cowboys”, defended the actions of their officer, saying the 34-year-old was Tasered for resisting arrest after taking them for a ” five-minute tour of the surroundings.